Yourwishisgranted earned his second career win Saturday, Sept. 4 in the $17,500 Indiana Sires Stakes Eligible pace, lowering his career mark to 1:54.0 in the process. The freshman gelding earned the win for driver-trainer Jay Cross. 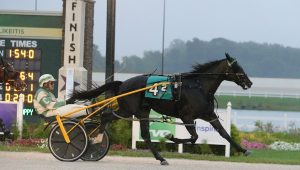 Yourwishisgranted and Jay Cross scored their second win of 2021 Saturday, Sept. 4 at Harrah’s Hoosier Park. The two-year-old is owned by William Huggins. Photo by Dean Gillette

Yourwishisgranted and Cross began their journey from post four and pursued the top spot early, even thought Topville Somrocket and Brandon Bates got the first call at the quarter in :28.0. Yourwishisgranted cleared the front before the half and was able to control the tempo for the remainder of the race, setting fractions of :57.1 and 1:26.4. He turned in a final panel in :27.1 to win by one and three-quarter lengths. Tony N Rock and Trace Tetrick moved up into second over Topville Somrocket.

Yourwishisgranted is owned by William Huggins and was bred by Victory Hill Farm Inc. The JK Endofanera freshman competed on the Indiana Sired Fair Circuit earlier this season before switching over to the pari-mutuel ranks. His granddam is the great race mare Ooh’s ‘n Aah’s, who earned more than $1 million during her career and was named O’Brien Older Pacing Mare of the Year in 1997 in Canada. Yourwishisgranted was part of the second crop of yearlings sold last fall. Huggins purchased him for $22,000 from the Hoosier Classic Yearling Sale. His mother, Onawish Hanover, is a 100 percent producer, including My Wish Came True with a mark of 1:50.4 and Rockin Machine with a mark of 1:51.1.