Driven by Kyle Wilfong, Pink Sunglasses got away in mid pack in her conditioned pace Friday, Dec. 3. Charlotte Royal N and Sam Widger led the way through early fractions of :26.3 and :56.1. Wilfong was able to get cover and moved to the outside around the final turn ready for the stretch drive. 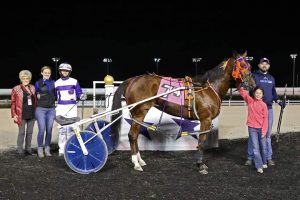 Bryces Lady and Brooke Nickells are joined in the winner’s circle by Bryce Nickells for the filly’s first career win Thursday, Dec. 2. Photo by Dean Gillette

Pink Sunglasses shook loose from the field and paced home in :27.2 for the win in 1:53.2. Stella Z Tam and Trace Tetrick rallied up for second over Skyway Bella and Bradley Ferguson for third.

Pink Sunglasses paid $7.00 for the win. Trained by Krista Harmon, Pink Sunglasses is owned by Krista and Rylee. The homebred filly is a daughter of Tellitlikeitis and is from Harmon’s good race mare Kerosene, also an Indiana sired mare who took a mark of 1:51.4 and made more than $350,000. She has already produced one six figure winner in RJ’s Dragon, who has a mark of 1:52.3 and more than $100,000 in earnings.

Thursday night’s card brought young Bryce Nickells to the winner’s circle with Bryces Lady. Driven by her mother, Brooke, Bryce met her three-year-old Time to Roll filly in the winner’s circle for the first time. Unraced at two, the filly is also a home bred from the Nickells’ good race mare Baby MC, who took a mark of 1:52.1 and earned more than $88,000. Bryces Lady is a third generation Nickells horse. Her grandmother is My Baby and Me, who was campaigned by Nickells to a mark of 1:51.3 and in excess of $230,000 in earnings.

Brooke also trains Bryces Lady, who earned the win in a time of 1:58.0. Ladyshootstheblues and Casey Leonard finished second over Peavine Delight and Trace Tetrick for third.