The first division of two-year-old trotting fillies proved to be a very competitive field to kick off the Indiana Sired Fair Circuit (ISFC) at the Clinton County Fairgrounds Monday, June 27. Youknowyoudid got back on the winning track and pulled in the win in a new career best time of 2:07.4. 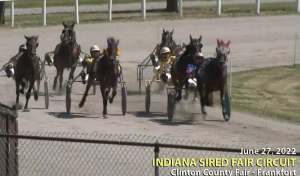 Youknowyoudid and Mike Peterson lead the way down the stretch in the first race of the first session of the ISFC at the Clinton County Fairgrounds Monday, June 27.

Starting from post two, Youknowyoudid was able to get out of the gate on top for Mike Peterson, who was a late driver change on the filly. She led the field through fractions of :33.1 and 1:05.4 before Peterson let her out a notch going to the three-quarters in 1:37.3. Naturdays and Matt Rheinheimer had tracked every stride from the two-hole as Doug Rideout and Unforgettable moved up to challenge on the outside.

Youknowyoudid is trained by Mervin Schmucker for Shady Lane Meadows, who also bred the filly. The Youknowyoudid filly is now three for four on the ISFC and is among the top five in the standings in the Quest For the Governor’s Cup.

Peterson and Schmucker also teamed up for a win in the second division of freshman filly trotters. Tucky Girl led the field gate to wire for the win by one length over Doug Rideout and Cash in the Bank. Edge of Rejoicing and Carrie Hollman finished third in the 2:09.0 mile.

Tucky Girl is owned by Rocking Meadows Stable, who also bred the Pinetucky filly. She is now four for four on the ISFC and leads the way in the standings for a spot in the Governor’s Cup Championships at the Indiana State Fairgrounds in August. Her quickest mile so far was recorded at Converse Fairgrounds in 2:06.4.

Other freshman filly trotting winners were Sure Do, driven and trained by Jay Cross, who earned their win by a half length over Nurse Rhonda and Doug Rideout. Sure Do stopped the timer in 2:08.2. Jailhouse Garland and Gerald Miller finished third. The You Know You Do filly is owned by Carl Hanes.

In the two-year-old colt and gelding trotting divisions, Mr Knowitall and Doug Rideout kept their spotless record in tact with another win, this time in a new lifetime best effort of 2:07.2. The You Know You Do gelding, owned by Julie Rideout and Dr. Alan White, led by open lengths during the mile, winning by four and one-half lengths over Braxton and Jay Cross. Brookview Dewey and Matt Rheinheimer finished third.

The quickest mile of the day was in the very last division of three-year-old colt and gelding pacers. Always-a-laser and Mike Peterson scored a gate to wire effort in 1:57.4. Virgins Beach Boy and Jordan Ross finished a half-length back in second over Vel Wemiss U Dean and Clay Craib. Mike Peterson owns and trains Always-a-laser. It was the first career win for the Always A Virgin colt, who had limited starts last year at two.