With the arrival of May also puts the foaling season for 2020 in the homestretch. Several stallions have joined the ranks in the Hoosier State, including You Know You Do, one of the newest stallions to join the fleet at Victory Hill Farm in LaGrange, Ind. 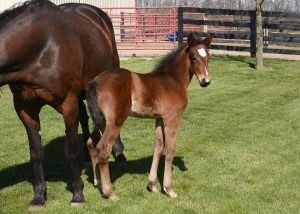 A new filly out of Glide Sally Glide represents the first crop of foals from You Know You Do. Photo by Dr. Alan White

A son of Muscle Hill, You Know You Do bred 73 mares during his first year in Indiana in 2019. Race timed in 1:50.1, the five-year-old stallion was a standout as a two-year-old winning five races and nearly $400,000 in earnings. Some of his highlights were the Peter Haughton Memorial at The Meadowlands, Champlain Stakes at Mohawk and the Bluegrass at The Red Mile. He completed his career with more than a half-million in earnings and a career best time of 1:53.2.

Several of his foals are on the ground this year, including a filly out of Glide Sally Glide for Dr. and Mrs. Alan White of Fountain City, Ind. The filly was born April 5 and is the eighth foal from White’s good race mare. During her career, Glide Sally Glide won in excess of $110,000 and took a mark of 1:56.1. Out of six foals of racing age, five have taken marks of 1:58 or faster, including the swift Just Jess, who has a mark of 1:54.4 and more than $300,000 during her career. In addition to her new You Know You Do filly, Glide Sally Glide has a yearling colt by Dover Dan named Hot Dan that will be on the track in 2021.