Between Trainers Verlin, James, and Jesse Yoder, a total of 12 horses qualified at Gil Crest Training Center Saturday, May 2. Many of them were Indiana sired three-year-olds and older, including the first race winner Explosive Swan. 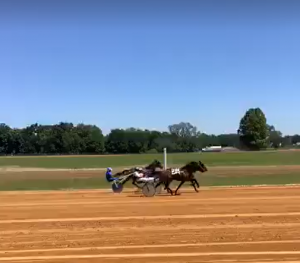 Driven by LeWayne Miller, Explosive Swan began from post two as Rompaway Beau and Krista Harmon set early fractions of :31.2, 1:02.2, and 1:32.2 before Olympic Glory and Verlin Yoder moved to the outside to challenge. Explosive Swan also moved up and grabbed the lead in the stretch, trotting home in :28.4 to get the best of a three-horse photo by one-half length in 2:01.2. Olympic Glory finished a nose ahead of Rompaway Beau for second.

It was the third qualifier of the year for Explosive Swan, who has won two of her three outings at Gil Crest Training Center in Bell, Fla. Her earlier win in 1:59.3 in qualifying action is her career best record. The Swan for All three-year-old had only two starts last year for Verlin Yoder. She will soon ship north to Indiana for the 2020 racing season. Explosive Swan was bred by John Lengacher of Grabill, Ind. and was a $35,000 purchase as a yearling from the Hoosier Classic Yearling Sale.

Other Indiana winners on the day included It’s a Herbie, driven by Verlin Yoder, who was an 11-length winner in 1:55.4 and Princess Sharktank, driven by James Yoder in a time of 1:59.2.