Woodside Charm may not be an Indiana sired product, but she is giving Indiana owner-trainer-driver Verlin Yoder his first start in the prestigious Breeders Crown eliminations Friday, Oct. 19. The daughter of Chapter Seven will seek to keep her stat line perfect from post five in the second of three eliminations of the two-year-old filly trot. 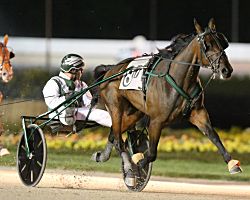 Woodside Charm made her racing debut at Hoosier Park in mid July, scoring a win in her maiden journey for Yoder. She immediately went to the New York Sires Stakes where she reeled off three straight wins at three different tracks and caught the attention of the racing world with her world record mile of 1:53.4 on the half mile oval at Saratoga. Woodside Charm comes into the Breeders Crown eliminations off a win, her fifth of five starts, in the $236,000 Kentuckiana Stakes. She has been tagged as the favorite at odds of 5-2.

“She’s a very smart horse, very easy to work on,” said Yoder in a story penned by Ken Weingartner of the US Trotting Association’s Media division. “I like her speed and smartness. She’s teachable. There are a lot of trotting fillies that are fast, but if you find one that’s teachable and you can use when you want to use, then it’s a different game. That’s what separates the good ones from the bad ones.”

Regarding his first start in the Breeders Crown, Yoder added, “I’ve never had anything to go with before. All I had before was BB guns. When you’re going to go in a big fight you’ve got to have a big gun. It’ll be exciting.”

Yoder now calls Bell, Fla. home but is a native of Indiana. He began his career in harness racing in 2004 and just toppled over the $1 million mark for earnings as a trainer in one season, a first, and is on track to do the same in the driver standings for 2018.

Woodside Charm and Yoder will step onto the track for the evening’s fourth race. Estimated post time for the event is 7:54 p.m. Friday, Oct. 19.