To say new Indiana sire Helpisontheway made a big statement Tuesday, June 21 at Harrah’s Hoosier Park would be an understatement. One of the first two-year-old trotting races was held with six of the nine entrants all by Helpisontheway. And, all six finished in the top six spots with Yo Beth D getting the win. 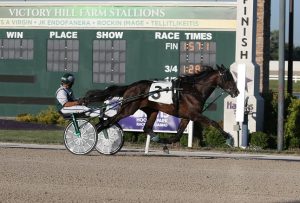 Yo Beth D and Verlin Yoder didn’t mess around in their racing debut, winning by open lengths in 1:57.1 to become the fastest foal so far by new Indiana sire Helpisontheway. Photo by Dean Gillette

Yo Beth D, most likely named after the popular television show “Yellowstone” character Beth Dutton, went straight to the lead for trainer-driver Verlin Yoder. She was on top by open lengths at the quarter in :29.1 and continued to lead the way untouched through middle fractions of :59.1 and 1:28.3.

In the stretch, Yo Beth D trotted home in :28.3 in her very first start to win by two and one-quarter lengths in 1:57.1. Helpfull Princess and James Yoder finished second over Facebook Official and Jared Finn. Other foals by Helpisontheway finishing fourth through sixth included Ten Count (LeWayne Miller), Helphasarrived (J.D. Finn) and Yo Carter (Jimmy Whittemore).

Yo Beth D was the favorite of the field due to an impressive qualifying win in 2:00.0. She paid $2.60 for the win. Verlin Yoder also owns the filly, who was bred by John Schmucker and sold under the name Smell the Roses last year at the Blooded Horse Sale for $14,000. A total of 58 foals were sold at public auction for the first crop of Helpisontheway, a son of Chapter Seven, and to date, he’s had 26 starters. Yo Beth D becomes his fastest with her win in 1:57.1. Here is Help, a colt, has a mark of 1:58.0 taken at Harrah’s Hoosier Park last week for trainer-driver Aaron Stutzman.

Yo Beth D is the latest foal out of the mare Scented Roses, who has a mark of 1:55 and earnings over $153,000. She has had two previous foals by Guccio with only one making a start. Scented Roses has quite a pedigree. She is a half sister to the great gelding Self Professed, who earned more than a million dollars during his career.