Yankees Aftershock and Josh Sutton scored a near gate to wire win Monday, April 11 at Miami Valley Raceway. The Indiana sired gelding scored the win in the $11,500 conditioned trot in 1:57.3. 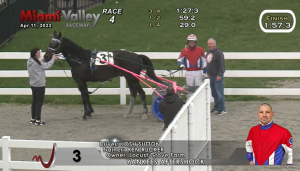 Yankees Aftershock and Josh Sutton were easy winners in the conditioned trot at Miami Valley Monday, April 11, trotting to a new lifetime mark of 1:57 .3.

Starting from post three, Yankees Aftershock was one of the horses that left for the lead, dropping in behind first leader Shamrocks and Jeremy Smith through the quarter in :29.0. Sutton had Yankees Aftershock out and moving around to the lead by the half in :59.2 and continued to lead the way through the three-quarters in 1:27.3. In the stretch, Yankees Aftershock opened up on the field by more than three lengths and coasted under the wire for the win by two lengths. Shamrocks finished second over What the Blaze and Dan Noble, who closed well to finish third.

Yankees Aftershock paid $9.40 for the win. The Pilgrims Chuckie four-year-old gelding is trained by Ken Rucker for Locust Grove Farm of Grabill, Ind. Karl Dean Miller of Ligonier, Ind. bred the gelding, who is from the maternal family of Lord Cromwell who has more than $500,000 in career earnings.

Yankees Aftershock was one of 10 yearlings sold by Pilgrims Chuckie at the 2019 yearling sales. He was purchased for $4,000 from the Michiana Classic Yearling Sale. His time of 1:57.3 in his latest win marks a new career best. Overall, he has seven wins and more than $42,000 in career earnings.

Also a winner on the Monday card at Miami Valley was Shady Deal, the seven-year-old son of Shadyshark Hanover. The gelding, driven by Tony Hall, followed cover after the half and paced home in :28.2 to win by a nose over Dreaming Dragon and Kayne Kauffman. Cherokees Gorgeous and Chris Page finished third.

Shady Deal paid $18.20 for the win. He is trained by Art Gillum Jr. and is owned by John Fitzwater of Ohio. Paul Webb bred the gelding. It was the second win of the year for the gelding, who has raced on both the trot and the pace during his career. His career time of 1:53.1 was taken last year at Northfield. The Indiana sired gelding has more than $52,000 on his card.