The team of Peter and Melanie Wrenn connected for two winners Friday, March 20 during the annual set of qualifiers held at Sunshine Meadows Equestrian Village in Delray Beach, Fla. A total of five races were held with two of the races won by Indiana sired horses driven and trained by the Wrenns. 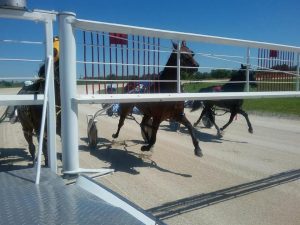 In the first race of the day, Peter guided Bluebird Keepsake to a two and one-half length victory in 2:01.1. The Swan for All sophomore filly trotted home with a final panel in :28 seconds to secure the win for owners David McDuffee and L & L DeVisser LLC. Daryl Miller is the breeder on Bluebird Keepsake, who was making her first career start for trainer Melanie. She was the sale topper during the 2018 Hoosier Classic Yearling Sale in Indianapolis with a price tag of $125,000.

Joining Bluebird Keepsake as a winner from the Wrenn barn was Odds on Madison. The three-year-old daughter of Tellitlikeitis sat third most of the mile before Peter pulled her out and finished strong, winning in 1:57.0 by one and one-half lengths, a final panel in :27.2. Odds on Madison is owned by Odds on Racing and was bred by Leon and Marlin Lehman.

After a two-year-old season last year that saw Odds on Madison on the track twice, the lightly raced Indiana sired filly was making her return to the races in the qualifier. Selling under the name Tellemhowtorock, Odds on Madison was the highest priced yearling by Tellitlikeitis that year which sold at the 2018 Hoosier Classic Yearling Sale at $50,000.