Fresh off the Breeders Crown weekend at Harrah’s Hoosier Park, Peter and Melanie Wrenn were back at work, this time, inspecting yearlings at the Standardbred Horse Sale, which began Monday, Nov. 2. The sale, normally held at Harrisburg, Pa., was moved to Timonium, Md. to the Maryland State Fairgrounds. This year and buyers were out in full force. 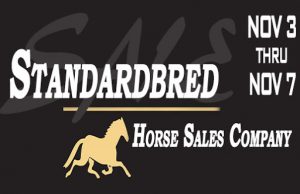 Several Indiana sired yearlings were scattered through the 400-plus yearlings in the book. Wrenn’s first purchase, Water Runner, was a Rockin Image filly consigned by Concord Stud Farm. The Indiana sired filly, listed as Hip No. 253, was purchased for $50,000 by Wrenn serving as agent. Her dam is Terroronthebeach, the dam of No Lou Zing, who has taken a mark of 1:49.2 this season and a third place finisher in the Adios.

The second Indiana sired yearling purchased by Wrenn was Hip No. 296, a son of JK Endofanera from the Hanover Shoe Farms consignment. Augustus Hanover is out of the mare All Tucked Up and was also knocked down for a price of $50,000. He is a half brother to Abuckabett Hanover who just competed in the Breeders Crown at Harrah’s Hoosier Park.

Another Indiana sired yearling that pulled in a nice purchase price was Herd Immunity, listed as Hip No. 334.  The Rockin Image colt out of the dam Cam Swifty was from the Concord Stud Farm and was purchased for $42,000 by Jamie Sullivan and Linda Chick. Cam Swifty earned $1 million in her career and took a mark of 1:50.0 and is the dam of Naughtytiltheend, who took a mark of 1:49.3 and earned $700,000 during her career.