Ten equine entrants lined the front paddock at Hoosier Park Tuesday, Oct. 30 as part of the annual Fright Night at the Races. The event included a Trunk or Treat for kids along with an Equine Costume Contest. 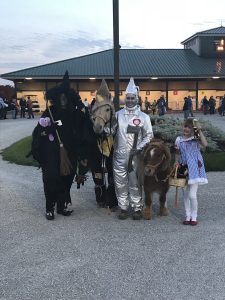 The Wizard of Oz group representing the Harmon Stable won first place in the Equine costume contest during Fright Night at the Races Tuesday, Oct. 30. (Photo by Hoosier Park)

The Harmon Stable took the top prize of $250 for first place for their Wizard of Oz portrayal. Little Bo Peep, representing the Smith Stable, finished second for the $150 prize money while the Knights portrayal won third place for $100. Other entrants in the contest included a princess from the Yoder Stable, the Wizard of Oz from the Shetler-Conrad Stable, a Skeleton Horse from the Eash-Karlsson group, Beckham’s Football team from the Macomber Stable, a 50’s duo from the Nickells barn, Peter Pan and Neverland team, and Mickey and Minnie Mouse, who were selected as People’s Choice. 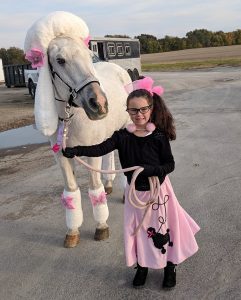 A Fifties duo represented the Nickells Stable in the annual equine costume contest at Hoosier Park. (Photo by Brooke Nickells)

The annual event is one of the most innovative promotions created at Hoosier Park. The horsemen and their families have embraced the event and plan months ahead for costumes, designing and fitting costumes for the equine participants in the contest.