Keene William and Sam Widger kicked off the Sunday, May 30 racing program at Harrah’s Hoosier Park with a big win in the $9,500 conditioned pace. A surprise to bettors, the Indiana sired gelding paid $54.60 for the win. 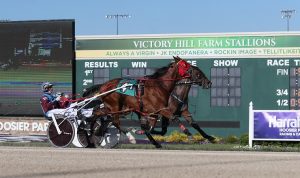 Keene William and Sam Widger opened up Sunday racing May 30 with an upset in conditioned pace action at Harrah’s Hoosier Park. Photo by Dean Gillette

Owned by William Keene, Elizabeth Keene and Douglas Bartley all of Kentucky, who are also the breeders, Keene William picked up his second win of 2021 under the direction of trainer Ronnie Roberts. The four-year-old son of Rockin Image also recorded a new career best time in the mile. He now has four career wins in 31 career starts and earnings in excess of $33,000. His dam, Keene Supreme, was a good race mare during her career. The Cambest mare took a mark of 1:52.4 and earned over $138,000 for the Keene family. Keene William is now her best performer.

The second race of the night also produced a photo finish as Rose Run Uriah and Joey Putnam fended off Snowball’s Romeo and Brandon Bates for the win in 1:50.0. The $35,000-$40,000 claiming field of six all paced home in :26 and change, with the exception of one horse. Rose Run Uriah came from off the pace to score the win. Trained by Britney Dillon, the five-year-old son of Jereme’s Jet is owned by William Hartt of Maine. It was his second win of the season and also a new career best time. Overall, Rose Run Uriah has 15 wins in 86 career starts with earnings over the $170,000 mark.