Kyle Wilfong added a driving triple to his stats Monday, Nov. 15 at Oak Grove Racing. The 30-year-old reinsman now has 17 wins this season to be ranked in second, one behind leader Christian Lind.

Wilfong guided Indiana sired Rollonbeauty to victory in the Fillies and Mares Open Monday, taking over in the stretch and rolling home to the win by three-quarters of a length. The Time to Roll mare, owned and trained by Curtis Rice, won the race in 1:52.2. Rock It Out, another Indiana sired mare, finished second for Todd Warren. Shesureissomething and Christian Lind finished third. 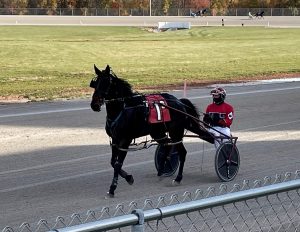 Wilfong also connected with Indiana sired Brysen, staying close to the lead the entire mile. He took over around the last turn and held steady to the wire for the win by one and one-quarter lengths in 1:52.4, a final quarter paced in :28.3. When You Dance and Christian Lind finished second over Indiana sired Townline Flight and John DeLong for third.

Brysen was a bit of a surprise, paying $11.20 for the win. The six-year-old Shadyshark Hanover gelding is owned by Jabrykel Racing and is trained by Dale Knox. Hoosier Standardbred and Fair Meadow Farm bred the gelding, who now has 10 career wins and earnings of more than $75,000.

Wilfong’s final win on Monday was recorded with Big Boy Frazier in the $7,800 conditioned pace. After grabbing the lead early, he said patiently along the inside and was able to find room late and rally home in :29.3 for the win in 1:54.3 by three and three-quarter lengths. Laurens Valley and James Stiltner II finished second. King Lil Joe and Jamaal Denson finished third.

Big Boy Frazier is trained by David Brooks. He was a big upset in the race, paying $31.60 for the win. Adam Brooks of Cambridge, Ill. owns the Yankee Skyscaper six-year-old gelding. It was his 17th career win in 116 starts.