It was a night of old timers at Buffalo Raceway Saturday, Feb. 5 with three of the first four races won by veteran racehorses in the double-digit age category, including Wild Bill M, an Indiana sired son of Panspacificflight. The 10-year-old gelding scored a nearly impossible win in conditioned pace action. 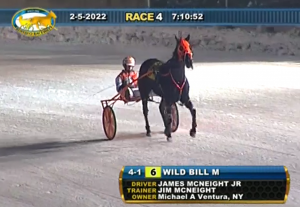 Starting from post six, Wild Bill M was one of three horses that left the gate quickly in search of the front end with Weekend Atnannies and Drew Monti grabbing the first lead. They were quickly overtaken by Dewar N Jack just after the quarter in :29.1 with James McNeight Jr. sitting in third with Wild Bill M.

Weekend Atnannies retook the lead before the half in :59.3 but an outside flow of horses quickly began to form, leaving Wild B M on the inside to follow along through the three-quarters in 1:30.0. Just as the outer flow started retreating so did Dewar N Jack, who backed into Wild Bill M and trapped him around the final turn. Midway through the turn, it appeared no one, including Wild Bill M, had a chance of catching Weekend Atnannines, who had opened up on the field by three at the head of the stretch.

As the field rounded the turn, Wild B M found racing room on the inside and got by Dewar N Jack. All of a sudden Weekend Atnannies tired badly, allowing Wild Bill M to catch the leader along the inside, grabbing the win by a nose. Calvery Hill and Kyle Cummings rallied up on the outside to finish third.

Despite being his fourth win in a row, Wild Bill M paid $10.00 for the win. He is trained by Jim McNeight and owned by Michael Ventura. David Miller of Michigan bred the gelding, He now has 33 career wins and more than $236,000 in earnings. His career best was taken as a five-year-old in 1:50.1 at Pocono Downs. He has been with his current connections since 2018. He is the only foal of Daisy Baraness, who has a mark of 1:54.4 and made $41,000.

Earlier on the card, 12-year-old Beginner’s Luck, a son of Camluck, was a winner in conditioned pacing action for McNeight Jr., giving him an early driving double. The other old timer that was a winner on the card was 10-year-old Raylan Givens for Drew Monti. The Rock N Roll Heaven gelding scored a gate to wire win in conditioned action at Buffalo.