The 26th season of Standardbred racing got underway at Harrah’s Hoosier Park Friday, March 29, and it was the hot hands of Sam Widger that stole the show, winning five races on the 14-race program. Widger opened up the night with a $27.40 winner in the first race, scoring the victory with Sher’s Speedyshark, trained by Walter Haynes Jr. 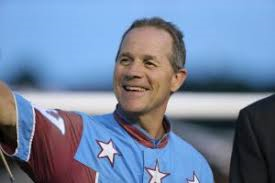 Sam Widger got off to a great start for 2019 at Harrah’s Hoosier Park, winning five races during the season opener. (Photo by Linscott Photography)

Sher’s Speedyshark was not a threat early in The Armed Forces, part of the new Claiming Challenge offered at Harrah’s Hoosier Park this season. The three-year-old Indiana bred son of Shadyshark Hanover followed the field to the top of the stretch before tipping out and rolling home to the win in 1:55.1 for owner-breeder George “The Sockman” Arft. Meetmeatthedance and Peter Wrenn finished second over Canyouimaginethis and Gale Smith for third.  It was the first start of 2019 for Sher’s Speedyshark.

Widger was back in the winner’s circle for the seventh race in a division of The Iron Lady Claiming Challenge, this time behind Skyway Dusty, trained by Pete Redder. Widger had the nine-year-old Sand Shooter mare on the lead from the start and fended off challengers for the win in 1:57.3. Skyway Dusty is owned by Therl Hensley.

Widger swept The Iron Lady series with a win in the eighth race behind Ideal’s Nicole for trainer Mike Arnold. The four-year-old Net Ten EOM mare cruised under the wire for the win in 1:56.0. Other winners for Widger included Keystone Tenacious, trained by Jeff Cullipher, and Camturo Rock, trained by Ryan Bellamy.

Other drivers with multiple wins on the season opener included Trace Tetrick, Todd Warren and LeWayne Miller, who each had two wins.