Sam Widger recorded his 7,000th career victory Wednesday, Oct. 20 at Harrah’s Hoosier Park in the third race of the night. He also gave two-year-old Yuengling her first career win in the mile recorded in 1:56.0. 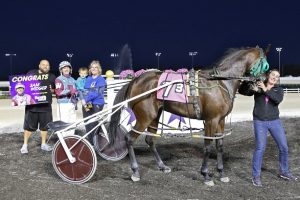 Starting from post seven, Yuengling and Widger moved over to the inside near the back of the pack, not finding a spot along the rail until after the quarter in :28.2. from there, they settled in seventh as Longwood Lolly and Trace Tetrick set the pace through the half in :57.1. Widger was able to move out behind cover around the final turn and was ready for the stretch drive.

Yuengling was able to pick up the pace in the lane and rallied home in :28.2 for the win by a half length over Longwood Lolly. Mystical Image and Jacob Fox finished third.

Yuengling is owned by Dessa and Zach Miller and trained by Zach. The JK Endofanera freshman filly earned her first career win in his sixth start. She was purchased by the Millers from the Hoosier Classic Yearling Sale last fall for $8,000 from breeder Duane Miller.

For Widger, it was his 233rd win of the year in more than 1,700 starts for 2021. Overall, Widger, a native of Illinois, has driven in more than 51,000 races in his career with earnings of more than $62 million. He began his driving career in 1986 at Quad City Downs and later found success in Chicago, having his first big year in 1997.  earning several titles until he relocated to Indiana approximately 11 years in 2010. The 58-year-old driver is ranked third on the list of leading drivers this season with 200 wins.