Whom Shall I Love, driven by Aaron Merriman, was a big winner at The Meadows Thursday, March 4 in a division of the Mary Wohlmuth Memorial. The Indiana sired trotter got a perfect trip before sliding up the inside in the stretch for the win in 1:57.1. 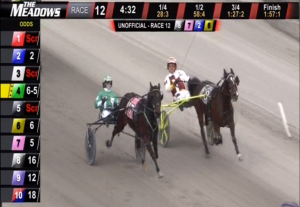 Whom Shall I Love, with Aaron Merriman, moves up the inside to score a new career best time in the Wolmuth Memorial at The Meadows Thursday, March 4.

Merriman stepped Whom Shall I Love out from the center of the track and got right in behind Wonmyheart Hanover and Hunter Myers. From there, the duo held steady as fractions of :28.3, :58.4 and 1:27.2 were established. The top two got company on the outside in the final turn by Graymatter Hanover and Brian Zendt, but as the field turned for home, it became a two-horse race.

Whom Shall I Love tipped to the inside and out trotted Wonmyheart Hanover to the finish line for the win by one length. Graymatter Hanover finished third.

Whom Shall I Love, going to post at odds of 16-1, paid $35.00 for the win. The four-year-old daughter of Whom Shall I Love is trained by Charles Myers and owned by Myers, Randy Stevenson, and Dana and James Phillips. Rocky Road Stable of Goshen, Ind. bred the trotting mare.

Whom Shall I Love was purchased out of the Fall Blooded Horse Sale as part of the annual dispersal of the Eash Racing Stable. The win in the Mary Wohlmuth was the first for the new connections. The win also established a new career best time. Whom Shall I Love was very successful on the Indiana Sired Fair Circuit as a two-year-old and now has in excess of $45,000 in career earnings. The race marked her sixth start of 2021 at The Meadows.

Several other Indiana sired horses made their way to the winner’s circle on the card. Undertaker, driven by Dan Rawlings was a winner in claiming action in 1:52.4. Owned by Robert Main and bred by John McGill, the nine-year-old son of Rockin Image paid $7.00 for the win.

Windsong Leo also earned a win in the afternoon’s featured $14,600 Open Handicap. Trained by Ron Burke, the Jereme’s Jet nine-year-old gelding was a near gate to wire winner for Dave Palone in a time of 1:51.1.

Finally, Startin Something and Tony Hall earned a come from behind win in claiming action in 1:54.4. The nine-year-old Rockin Image gelding was a winner by a neck for trainer-owner Samantha Blystone.