Driver Jimmy Whittemore and Trainer Jay Hochstetler teamed up to win the early double at Harrah’s Hoosier Park Friday, May 20. The evening started with Brooklets Banner as a winner in the first race followed by the return of Ponda Warrior in the second race with an impressive performance. 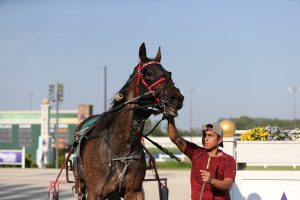 Brooklets Banner comes into the winner’s circle after winning the first race Friday, May 20 at Harrah’s Hoosier Park. Photo by Dean Gillette

Brooklets Banner kicked off the night by getting away in third with Drivin Me Crazy and Brandon Bates getting the early lead by open lengths, setting fractions of :27.1 and :55.1 before the rest of the field began to close the gap. In the stretch, Brooklets Banner found the room he needed and rallied to a win, reaching the wire a head in front of Velocity Ian and Robert Taylor. Rockin Sandsave and Michael Oosting finished third.

Brooklets Banner was not a favorite choice by bettors, paying $21.60 for the win. The six-year-old gelding is representative of old Indiana breeding. He is a son of longtime stallion Personal Power for Gary Wilcox, who owns and bred Brooklets Banner. The gelding is now two for four this season after not winning a race since he was four-years-old. His career best time was taken at four in 1:50.3 at Harrah’s Hoosier Park. His bankroll is more than $60,000 for Wilcox.

Joining Brooklets Banner as a winner on the card was Ponda Warrior in the second race of the night. Whittemore had the rail with the now three-year-old and got away second behind Lucks on Time and Brandon Bates at the quarter in :27.3. Soaring Now and Andy Shetler then moved to the lead and was on top at the half in :55.4. Ponda Warrior sat patiently on the inside until the final turn.

At the top of the stretch, Ponda Warrior was able to flush out Lucks on Time for a little cover before straightening up in the lane. Ponda Warrior went to work, turning in a final panel in :26.3 for the win in 1:51.1. Soaring Now finished second over Thunder Country and John DeLong, who closed well to finish third.

Ponda Warrior was the favorite of the field, paying $5.20 for the win. The Rockin Image sophomore is owned by Jay Hochstetler, Finkelberg Racing, and South of the Tracks Rac. Pond-A-Acres bred the colt, who was making his three-year-old debut after a big freshman campaign that brought him three wins in nine starts and more than $116,000 in career earnings. His three-year-old debut also placed a new lifetime mark on his credentials in the 1:51.1 mile.

Hochstetler and Whittemore also found success in the $22,000 final of the Expresson Series. Several lead changes took place early on before Starlit Dandy and Robert Taylor took over in the second half. In the stretch Flat Out Foxy and Sam Widger had the biggest kick to win in 1:55.0. They were a length ahead of the Jay Hochstetler-trained DJ Dan, driven by Whittemore. Starlit Dandy finished third.

Flat Out Foxy was an upset winner, paying $18.60 for the win in the Series Final. The Whom Shall I Fear gelding is trained by Jeff Edwards and owned by Denise Dennis and John Johannsen. Nathaniel Yoder bred the sophomore trotter, who earned his first win of 2022 in his second start. The mile was a new lifetime mark for Flat Out Foxy.