Trainer Justin White made a lot of trips to the front of the grandstand Saturday, Sept. 14 as horses from his barn won six races on the card. Five of the wins were connected to Joey Putnam but one win brought Joey’s dad, Joe, to the race bike as Panther Time scored a win in the two-year-old colt and gelding pacing ranks. 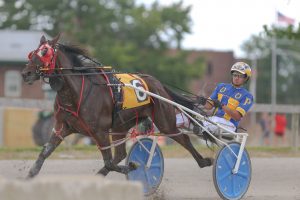 Panther Time, shown with Joey Putnam earlier this summer at Frankfort, was a winner for driver Joe Putnam Sat. Sept. 14 at Connersville. It was one of six wins on the card for trainer Justin White. Photo by Dean Gillette

White had two in the race, which was the third on the 18-race card. Joey opted to drive Roll With Time leaving the seat behind Panther Time open. Joe took the controls and guided the Panther Hanover gelding from the back of the pack to slowly make his way to the front, timing the finish line just right with the win by a neck over Moneylikeitis and Andy Shetler. ER Sundance and Don Eash finished third in the mile timed in 2:01.3.

Owned by Eleven Star Stable, Panther Time earned his fourth win in 13 starts this season. In addition to his four wins, he has had five second place finishes this year. His best time of 2:00.3 was taken at Portland in early August. It was the first time a different driver had sat behind Panther Time. Joey had guided him in all of his previous 12 starts prior to his win at Connersville.

The father son duo of Joe and Joey Putnam also connected for a win in the freshman trotting ranks with Ultimate Power, a Whom Shall I Fear colt owned by Melvin Schmucker.