Whata Swan scored a win in the final qualifier at Harrah’s Hoosier Park before racing resumes for the 27th season of Standardbred racing in Indiana. Guided by John DeLong, the Swan for All son stopped the timer in 1:55.0, trotting his final quarter in :26.4. 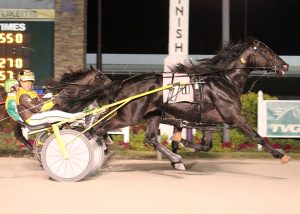 Starting from post seven, Whata Swan used early speed but did not make the front, parked on the outside of Horns for Three and Sam Widger, who led the way to the top of the stretch. Whata Swan made another run at the leaders in the stretch and rolled right on by, opening up by six and three-quarter lengths at the finish for the win. True Blue Stride and Walter Haynes Jr. finished second over Jailhouse Buckaroo and Dale Hiteman for third.

Owned by John Barnard, Whata Swan set the three-year-old trotting colt record at Dayton Raceway in December. The now four-year-old horse had several starts prior to the Covid-19 shutdown but returns with the lone qualifier Saturday, June 13 in preparation for the pari-mutuel season. Bred by Leonard Miller of Topeka, Ind., Whata Swan is trained by Luis Quevedo.

DeLong also connected in the first race with Got the Groove, a five-year-old son of Guccio from his barn with his wife, Tabitha, serving as trainer. The nearly gate to wire mile was completed in 1:55.0, a half-length ahead of Martini Show and Sam Widger. Born to Thrive, who returns from wintering in Florida, was third for Rick Plano.

Live racing gets underway for the season opener Tuesday, June 16. First post time is 6:30 p.m. for the 14-race card.