Whata Swan has come back just as competitive this year as he has in the past. The five-year-old son of Swan for All is now two for three with one second in 2021 after turning in a dominant performance in the Open Trot Saturday, April 10 at Harrah’s Hoosier Park. 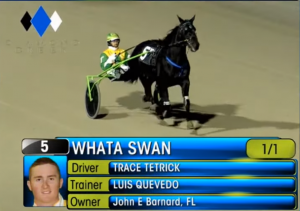 Whata Swan and Trace Tetrick turned in a dominant performance in the Open Trot Saturday, April 10, winning by more than five lengths.

Driver Trace Tetrick left from the center of the pack with intentions of getting to the lead, but Bridge to Jesse’s was able to get the top spot heading into the first turn, leaving Whata Swan on the outside at the quarter in :27.3. Whata Swan moved onto the lead and got a breather through middle fractions of :57.1 and 1:26.1 before kicking into high gear in the stretch, trotting home in :27.1 for the win in 1:53.2, winning by five and one-quarter lengths. Jeffery P and Ricky Macomber Jr. closed well late in the race for second over Two OB Wonkenobi and LeWayne Miller for third.

The favorite of the field, Whata Swan paid $3.80 for the win. He is trained by Luis “Tony” Quevedo and owned by John Barnard. Leonard Miller bred the standout stallion, who is part of a string of successful trotters from the Quevedo barn, including Swan Chase, who finished fifth in the race and Fiftydallarbill, Breeders Crown winner and now standing his first season at stud in Indiana.

It was one of seven wins on the night for Tetrick, who is Indiana’s all-time leading driver.  Tetrick is now in second place through nine programs with 16 wins behind John DeLong, who has won 18 races. Sam Widger is in third with 15 wins.

Jeff Cullipher leads the trainer standings with 10 wins followed by Peter Redder with seven. The Missy Essig Stable is in third with six wins so far in an impressive nine starts for a 67 percent win average.