Whata Swan and driver Robert Taylor turned the $15,000 Open 2 Trot into an exciting finish. The duo chased down horses on the front and fended off late closers from the back to score the win in 1:53.0. The top five finishers were within two lengths of each other at the finish. 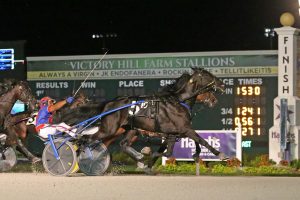 Whata Swan trotted home to a new lifetime mark in the Open Trot at Harrah’s Hoosier Park Friday, Aug. 7. Robert Taylor drove the four-year-old to victory in the 1:53.0 mile. Photo by Dean Gillette

There were three leaders during the race. Swan Chase and Brandon Bates led the way through the quarter in :27.1 while Got the Groove and John DeLong led through the half in :56.1. At the three-quarters, it was Jack Vernon and Peter Wrenn’s turn to lead the way into the stretch.

Midway through the stretch, Whata Swan turned his first over journey into a perfectly timed attack, trotting home in :28.1 to seize the win by a half-length. Got the Groove finished second while Beabob’s Bear and Dale Hiteman closed in quickest of all to finish third, a neck ahead of Trolley and Trace Tetrick.

Whata Swan was a bit of a surprise to the betting public, paying $9.20 for the win. The four-year-old Swan for All horse is owned by John Barnard and was bred by Leonard Miller of Topeka, Ind. It was the fourth win of the year for Whata Swan, who now has more than $200,000 in career earnings. The mile also marked a new career best for the horse who has 14 career wins in 51 career starts. Luis Quevedo trains the horse who was purchased by Barnard for $39,000 at the Michiana Classic Yearling Sale in 2017.