Shara Weaver and Madeline “Micki” Roche of Indiana continue to see results from their first Standardbred racehorse, Two O B Wonkenobi. The owners, who refer to their stable as Two Old Broads, experienced an Ohio Sires Stakes champion in 2018. Now, they are seeing their trotter nicknamed “Tobe” take on the best older trotters with a win in the $17,000 Open Trot 2 at Harrah’s Hoosier Park. 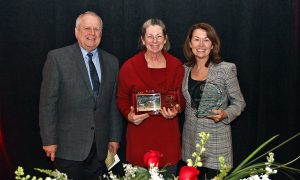 Two OB Wonkenobi rallied to the lead after the quarter in :27.1 and kept on trucking, shooting fractions of :56.2 and 1:25.2 on the board. In the stretch, the four-year-old Dejarmbro gelding trotted away from the field and into the winner’s circle by three and one-half lengths for the win in 1:52.1. Driver Sam Widger rode along for a final quarter in :26.4. Churita and Trace Tetrick finished second followed by Got The Groove and John DeLong for third.

Trained by Ernie Gaskin, “Tobe” now has two wins in five starts for 2019. His quick mile Saturday at Harrah’s Hoosier Park is a new career best for Weaver and Roche. He now has 12 wins in 27 starts with more than $282,000 in purse earnings.

Shannon Hall, the dam of Two O B Wonkenobi, was purchased by Weaver and Roche in foal to Dejarmbro with the eventual gelding they are having so much success with. They recently had an Indiana bred colt born by new stallion Whom Shall I Fear that they have named Two O B Manopause.