Due to weather-related issues, two Indiana county fairs have altered their planned racing schedules. Weather affected racing Saturday, July 21 at the Elkhart County Fair in Goshen, Ind. and the races were postponed. They will now be held Monday, July 23 beginning at 10 a.m. As a result of that change, the races previously scheduled for Monday will be moved to Tuesday, July 24 beginning at 10 a.m. The program will run directly into the races originally scheduled for Tuesday, creating a double header of racing for the day. 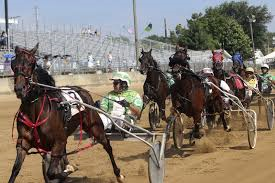 Harness racing is an important part of the Elkhart County 4-H Fair each year, and even though weather caused a cancelation Saturday, the fair has rescheduled to ensure all racing is held in 2018. (Photo by Goshen News)

Harness racing is a staple for the Elkhart County 4-H Fair, which was ranked 7th in the nation last year by The Insider Travel magazine. With more than 200,000 people attending the nine-day event each year, the fair holds the honor of being the largest county fair in the Midwest. Because of that success, fair board officials announced a long-term plan earlier this year in the Goshen News for expansion, with one phase requiring the relocation of the harness racing track as well as the draft horse barn. The proposed move would put the track on the south end of the current property.

Always a magnet for fair goers to watch top entertainment, this year’s Elkhart County 4-H Fair will have several well-known acts on stage. At the conclusion of Tuesday’s harness racing program, crews will work to get the area ready for the evening concert featuring the country group Lanco, who has a current top 40 hit, “Greatest Love Story.”

Although the Newton County Fair has already been held this year, the fair is committed to getting their races rescheduled. Weather affected the racing program at the Newton County Fair in Kentland last Saturday, July 14. As a result of that cancellation, they will hold a replacement day of racing Friday, July 27. Those wishing to enter need to do so on Tuesday, July 24.