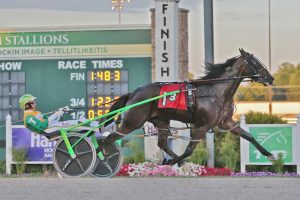 Guided by Trace Tetrick, Virgo had the inside post and got away in fourth at the quarter in :26.4 as Skyway Victor and Joey Putnam led the way. Virgo was sitting second at the half in :55.2 before moving to the lead at the three-quarter mile marker in 1:22.2. Virgo got an open length lead on the field, pacing home in :26.1 for the win by two lengths. Roll Em and Ricky Macomber Jr. finished second, just a neck ahead of Ultimaroca and Chris Page. Eight of the ten starters in the field paced home in :26 and change with the top six finishers pacing under the 1:50 time barrier, showing the depth of talent in the three-year-old pacing ranks this season.

Virgo paid $8.60 for the win. The Always a Virgin son is trained by Dylan Davis and owned by Howard Taylor, Jeffrey Billings and Davis. Dustin Miller bred the standout gelding, who now has four wins this season. His career bankroll is reaching $250,000 and he has only finished off the board twice in 10 starts this year.

Joining Virgo as a winner in Indiana Sires Stakes action was Rogers Image from the Ron Burke barn. The Rockin Image gelding was moved into the outer flow of traffic after the half by driver John DeLong and timed the stretch just right, pacing home in :27.0 for the win in 1:50.0. Brookview Bullet and Sam Widger finished two lengths back in second and a neck over JK Going West and James Yoder for third.

Rogers Image was the favorite of the field. He is owned by Burke Racing Stable, J & T Silva -Purnel & Libby, Ras Racing LLC and Weaver Bruscemi. Stephanie Smith-Rothaug bred the sophomore pacing gelding, who has won six of his starts this season. The mile also established a new career mark for Rogers Image, who has in excess of $150,000 in career earnings.

Also on the card was the return of Fulfullnmydestiny and James Yoder. Fresh off their track record performance last week in 1:49.2, the duo won again in 1:50.2 with an impressive effort. Fulfullnmydestiny made a break before the start and recovered from mid pack, taking over at the half and fending off Ponda Warrior for the win by three-quarters of a length. Yourwishisgranted and Jay Cross finished third.

Fulfullnmydestiny is owned by Brett Boyd Racing Inc., who also bred the Tellitlikeitis gelding. He is now four for seven in his brief career and is now on a four-race win streak for his connections.

Dalby Hanover and Joey Putnam won the final ISS event of the night, scoring a 1:51.0 win in the two-year-old colt and gelding ranks. Trained by Britney Dillon, Dalby Hanover was flushed out after the half and grinded his way to the wire, winning by a neck over Gentle Giant and Trace Tetrick. Paw Patrol and John DeLong finished third.

Dalby Hanover was a big longshot in the field, paying $52.40 for the win. The Rockin Image gelding is owned by Charles Stein of Ohio and was bred by Hanover Shoe Farms. It was his second career win in six starts.