The Indiana Sired Fair Circuit (ISFC) kicked off Wednesday, June 1 at the Converse Fairgrounds with a renewed effort to publicize the series leading up to the Governor’s Cup at the Indiana State Fairgrounds in early August. “The Quest for the Governor’s Cup” began for several two-year-olds in their racing debuts, including Virgins Big Money, winner of the first race of the season for driver Jordan Ross. 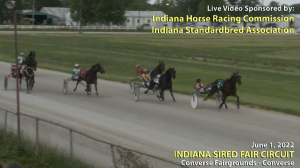 Virgins Big Money and Jordan Ross repel challengers in the first race of the ISFC of 2022. All races will be televised live through streaming services and may be found on the homepage of the ISA Website in the “Quest for the Governor’s Cup.”

Midway through the lane, Virgins Big Money found another gear and pulled away from the field to score the win by one and three-quarter lengths, a final panel in :29.4. Vel Miss Taylor finished second over a hard-charging Always in Flight on the outside for Michael Detweiler for third.

Virgins Big Money is owned and bred by Fix It Up Farm and trained by Mervin Schmucker. The freshman daughter of Always a Virgin was making her racing debut and now has a mark of 2:03.0 to place on her credentials. Her dam, Credible Blu, was a credible race mare, taking a mark of 1:50.4 and earning over $81,000 before becoming a brood mare. She has produced one with a mark of 1:54.1 and Virgins Big Money is her latest foal.

Other two-year-old filly pacing winners on the day included Kruisin Kristen and Jay Cross in 2:02.0 for owner-trainer Alvin Miller, Take Your Pick and Clifton Bell in 2:00.2 for trainer Curtis Rice and owner Greg Riley, Swartz Bros Elen and Joey Putnam in 2:05.0 for Justin White, who trains for Roger Wilkin, and finally Here We Go BB and Doug Rideout, who also trains, for Sheila Parcher. The filly won in 2:01.2.

In the two-year-old colt and gelding pacing ranks, two freshman broke the 2:00 mark in their racing debuts. Glawbanera and Logan Loney and Jones Z Tam and Mackenzie McDonald were dominant winners in their divisions in 1:59.0. Glawbanera, a son of JK Endofanera, is trained by Donna Loney for owner James Reed. Jones Z Tam is trained by McDonald, who also owns the gelding. Other two-year-old pacing colt and gelding winners included Vel Big Bruiser (Bradley Ferguson, 2:07.0); Goosebumpsthefrog (Clifton Bell, 2:00.3); and Little Fighter (Clint Coy, 2:07.1).

Three-year-old trotters closed out the first session. Crescent Beauty was a winner in filly trotting action for driver-trainer Doug Rideout in 2:03.0 as the fastest division. Julie Rideout and Peter Schmucker Jr. own the Crescent Fashion filly. Swartz Bros Sam was the fastest colt-gelding division winner in 2:01.3. He was guided by Joey Putnam for trainer Justin White and owner Roger Wilkin.

Two-year-old trotters will kick off the second session at Converse at 11 a.m. Thursday, June 2 in the “Quest for the Governor’s Cup.”