Victoria Swan, the three-year-old trotter owned by Nat and Patty Hill, made a special guest appearance at the Indiana State Fair Speed Barns exhibit Wednesday, Aug. 15. The daughter of Swan For All has been racing on the Indiana fair circuit this season but currently has a break from racing and enough time for a visit to fair goers. 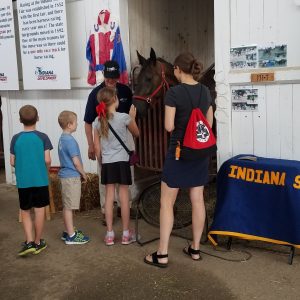 Accompanied by Nat, Victoria Swan was on display in the historic Speed Barns, which has been offered as a stop for fair goers during the 17 days of the Indiana State Fair. Organized and handled by the staff of the Indiana Standardbred Breed Development (ISBD) staff, the area has provided all types of interactive options for those who stop by wishing to learn more about harness racing.

Of course, one of the biggest draws of the exhibit are the horses. Rockin Kimmage, owned by Emily Dever, Hillcrest Power, owned by Rachel Klotz, Rocket Fuel, owned by Twila Harts, and Victoria Swan, owned by the Hills have all been part of the show, greeting those who stop by as they visit different exhibits at the fair.

The ISBD exhibit will continue through Sunday, Aug. 19. The exhibit is open daily from 10 a.m. until 7 p.m. and is easily accessible from the State Fair tram, which has a stop just outside of the barn, located off the first turn of the mile track at the Indiana State Fairgrounds.