Electric Lad, one of the toughest Indiana bred horses to race in recent years, passed away following a paddock accident. Owned by Ryan Bellamy and Gina Parisi, the 15-year-old retired son of Electric Yankee raced as long as the rules would allow, retiring at the end of 2019 for Bellamy, who trained him throughout most of his career. 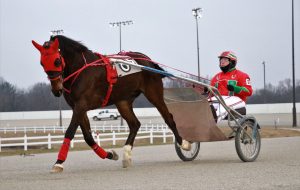 Electric Lad is shown warming up with trainer-owner Ryan Bellamy during his stellar career at Harrah’s Hoosier Park. Photo by Dean Gillette

Known for his ornery disposition in the barn and the paddock, Electric Lad raced consistently for 13 years. With the exception of his two-year-old season when he only had 10 starts, he turned in a minimum of 27 starts annually until his 14th year of racing. In all, Electric Lad finished with a stat line of 54 wins in 380 starts, earning in excess of $453,000, most of which came in regular non-stakes action, showing his true grit during his career. His career best time of 1:51.2 was taken at the age of nine at Harrah’s Hoosier Park in 2014, and he was a winner every year during his career.

Foaled in Topeka, Ind. by John R. Miller, Electric Lad was part of the Electric Yankee dynasty that led the state of Indiana in the early days of pari-mutuel racing. The sire produced many Indiana Sires Stakes winners prior to the arrival of current day standout stallions. Bellamy lost the gelding a few times during his career due to claims, but always found a way to get the temperamental gelding back in his barn, owning him for good since 2017. He initially claimed him for $10,000.

Electric Lad was featured in the December 2019 issue of the Indiana Standardbred Magazine, just prior to his forced retirement from racing due to his age. Bellamy noted at the time he was still sound and still possessed the racing spirit. He comes from rich bloodlines as he is a half brother to the tough pacer Mykindachip, who is still racing at the age of 11 and is closing in on $1 million in purse earnings.

In the previous article, Bellamy said this about Electric Lad, “He’s perfect once he’s on the track. Nothing scares him and he’s a very smart horse—you can do anything with him on the track and surprisingly, he’s perfect to work with after the race. It’s like he knows its part of the routine and he’ll stand like a statue to be done up and put away. I give a lot of credit for the horse’s success to my girlfriend Gina Parisi, as she takes great care of him, and has to put up with his antics on a daily basis.”

Electric Lad was known for his speed off the gate, and if there was a shortened distance, Electric Lad was most likely in front from the start. He won a five-eighths mile dash at Miami Valley and just missed the world record by three-fifths of a second. He also won an eighth of a mile dash at Indiana Downs.

Bellamy completed the career of Electric Lad in Ohio in 2019. He noted at the time, he would still jog him occasionally to keep him from “going crazy,” noting, “he’d rather be racing than sitting out in a paddock.”

A true veteran racehorse and a true plus to the Indiana racing and breeding program.