It was a damp night of action at The Downs at Mohegan Sun but one filly blazed across the surface to win the $600,000 Breeders Crown for two-year-old trotting fillies. The heavily favored Woodside Charm, owned, trained and driven by Indiana’s Verlin Yoder, scored the gate to wire win and accept the Frederick Van Lennep Memorial trophy. 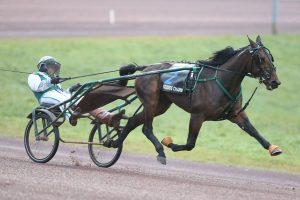 Starting from post two, Woodside Charm rallied out to the lead and never let up, posting fractions of :27.4, :57.1 and 1:25.2 before rolling home to the one and three-quarter length win in 1:54.1. When Dovescry and Simon Allard was a comfortable second after following Woodside Charm around the track while Cloud Nine Fashion and Tim Tetrick finished third.

Woodside Charm remains perfect in her career. The Chapter Seven filly, who was foaled in Wolcottville, Ind. by Lester Beechy, increased her career bankroll to more than $521,000. Her best time was recorded in the preliminary round for the Breeders Crown in a time of 1:53.0. She is a perfect seven for seven. 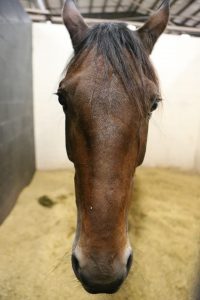 Homicide Hunter had his game face on in the paddock prior to his win in the Open Trot. (Photo by Dean Gillette)

Later in the card, Homicide Hunter, the sport’s fastest trotter, sat patiently in the two hole and tipped out in the stretch to win the $500,000 Breeders Crown Open Trot. Trained by Chris Oakes and driven by George Napolitano Jr., Homicide Hunter scored the win in 1:52.3. Top Flight Angel and Andy Miller finished second while Warrawee Roo and Daniel Dube were third.

The Indiana sired Homicide Hunter has won nine of 16 starts for 2018 and 39 races overall. The Mr Cantab gelding is now sitting at $1.7 million in purse earnings for Crawford Farms Racing of New York.

Photographer Dean Gillette was trackside during the rainy night of action at The Downs at Mohegan Sun Pocono. Full coverage of the event will be available in the next issue of the ISA Magazine.