Late closing action continued at Harrah’s Hoosier Park Saturday, June 27 with Venom scoring a convincing win with Trace Tetrick in the bike. It was one of five wins on the card for Tetrick, who is the state’s all-time leading driver. 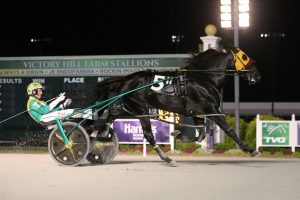 Venom was one of five winners on the Saturday, June 27 racing card at Harrah’s Hoosier Park. Photo by Dean Gillette

Starting from post five, Venom opted for a spot along the pylons near the back of the pack from the start as Pet Shark and Brandon Bates moved out to take over at the quarter in :26.3. From there, the tempo stayed lively and a second flow of traffic formed on the outside, giving Venom the option to follow cover to the leaders. In the stretch, Venom took over and extended his lead to five at the wire, winning in 1:51.2, a final panel in :26.2. Elite Awards and Ricky Macomber Jr. finished second over Manhattan Beach and Luke Plano for third.

Trained by Charlie Stewart, Venom is owned by Jack Freeman. The five-year-old Rock N Roll Heaven gelding has three wins in eight starts this year. The time of 1:51.2 in the Mega Bowl matched his career best taken at three at Harrah’s Hoosier Park. He now has in excess of $79,000 in career earnings.

Also, on the Saturday card was a win by M E Radar Girl in the UJSTA Series. Hailing from the Tyler George Barn, the Radar Sign seven-year-old mare got good early positioning and saved her best stride for last, closing in the stretch to win by one and three-quarter lengths in 1:52.4 with Tetrick at the controls. Crazy Bad K and Sam Widger finished second over Artini and Bates for third.

ME Radar Girl is owned by SCP Stable of Georgia and George. She was bred by Lester Schmucker and has six wins this year and more than $52,000 accumulated in 2020. The veteran mare has 39 wins total with more than $257,000 in career earnings. Her final time in the USTA matched her career best in 1:52.4 taken at five at Northfield Park.

Another familiar name in the winner’s circle Saturday was Katkin American from the James Yoder Barn. A near gate to wire effort gave him his first win in his first start of 2020. The five-year-old Guccio gelding, who was unraced last year at four, now has in excess of $225,000 and has only missed the top two finishes once in 13 career starts for Yoder, who also trains. Katkin American is owned by Brett Boyd Racing of Jonesville, Michigan. Boyd Racing also bred the standout Indiana trotter.

Joining Katkin American as a former Indiana state champ was Fully a Virgin, who won the $12,500 Four-Year-Old Mares Pace. The Shane Bowermaster-trained Always a Virgin mare was a nose winner over stablemate Pansy’s Image and Sam Widger, who were placed third in the official order of finish, moving Rockin Nola up to second. Michael Oosting drove Fully a Virgin, who has in excess of $339,000 in career earnings. Last year’s sophomore pacing filly champ is owned by breeder Emerald Highlands Farm.