The Noble County Fairgrounds played host to its lone Indiana Sired Fair Circuit (ISFC) event Saturday, July 9. One of the most competitive races on the year was a division of three-year-old pacing fillies with Velstraightdreamer and Bradley Ferguson getting the win in 2:04.3. 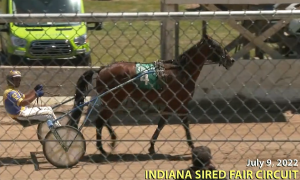 Velstraightdreamer and Bradley Ferguson stop for a photo after their win at the Noble County Fairgrounds.

Starting from post four in the four-filly lineup, Velstraightdreamer went to the back of the pack as Running On Faith and Daryl Bontrager led the way through fractions of :30.1 and 1:01.4. Just after the half, Ferguson began a big move from last to the leader, challenging Running on Faith at the three-quarters in 1:33.4. The two fillies battled around the final turn with Velstraightdreamer starting to pull away in the stretch, winning by one length. Running on Faith, who appeared to have a broken tie down, finished second over Vel Ya Want To and Carson Conrad.

Velstraightdreamer is owned by King Racing Stable. Larry King trains the Straight Shooting filly, who was bred by Charlie K Racing. The win was the second of the year for the filly, who went seven for seven last year as a two-year-old. Her career best time was taken earlier this year in 1:59.3 at Frankfort.

The other division of sophomore pacing fillies was won by AL Perfection and Daryl Bontrager. The duo got the early lead through fractions of :32.1 and 1:050 before Zig Zag Zoom began to challenge on the outside. In the stretch, Al Perfection came back and retook the lead, posting a win in 2:07.2. Zig Zag Zoom was second over Velgoodgollymolly and Bradley Ferguson for third.

AL Perfection is owned by The Ocean Mist Farm and was bred by Amos Wengerd. Scott Linville trains the Blueridge Camagot filly. It was her second win of 2022 in her seventh start after going winless last year as a two-year-old.