Vel Mr Nice Guy has turned his last month into three wins at three different tracks. The Indiana sired gelding made his Plainridge debut a winning one Monday, June 20 in the $22,500 Open Pace. 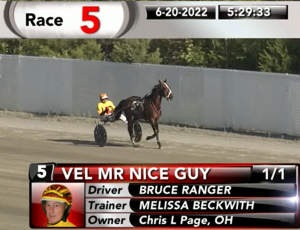 Vel Mr Nice Guy made his Plainridge debut an impressive outing with a win in the Open Pace with Bruce Ranger in the bike.

Guided by Bruce Ranger, Vel Mr Nice Guy traveled to Plainridge fresh off a win at The Meadowlands and Harrah’s Philadelphia. He was chosen as the favorite of the afternoon’s featured event and wasted no time proving his ability. The Straight Shooting four-year-old went straight to the lead from the center of the pack and was untouched through the quarter in :26.4 and half in :55.3. Heading to the three-quarters, Bettor Memories and Heath Campbell moved up on the outside to challenge followed by a full second row of challengers.

In the stretch, Rollinlikethunder and Kevin Switzer Jr. tipped to the outside from their resting spot in the two hole and also challenged. Vel Mr Nice Guy was too tough, cruising under the wire in 1:51.0, a final quarter in :27.4. Rollinlikethunder was second over Bettor Memories, who finished with broken equipment for third.

Vel Mr. Nice Guy paid $4.20 for the win. The once Indiana Sired Fair Circuit (ISFC) contender under the direction of trainer Larry King is now owned by Chris Page. Scott DiDomenico has been training him on the East Coast. He now moves to the Melissa Beckwith barn.