A total of eight $10,000 Consolations for the Governor’s Cup were held Thursday, Aug. 11 during a late morning start and Trainer Larry King kicked off the card with a one-two punch in the Two-Year-Old Filly Pacers with a win and a second from Vel Miss Taylor and Vel Straight Fun. The Consolation rounds included horses that were ranked ninth through 16 during the Indiana Sired Fair Circuit (ISFC) over the summer. Vel Miss Taylor was ranked 17th and got in due to another filly not having the required starts to participate in the Consolation at the Indiana State Fairgrounds. 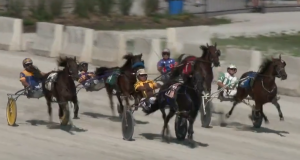 Starting from post six, driver Doug Rideout moved Vel Miss Taylor over to the inside path as Momma’s the Queen and Carson Conrad went to the lead to set fractions of :30.3 and 1:03.4 before feeling pressure on the outside from Velsandyslilshootr and Jordan Ross, who were first up.  The fillies were bunched up around the final turn and as they hit the stretch, it was anybody’s race to win. Rideout moved Vel Miss Taylor from her second over trip to the center of the track and once she got her momentum going, she advanced with a :28.1 final quarter to score the win by one length over stablemate Vel Straight Fun and Bradley Ferguson. Momma’s the Queen defended her inside path for third.

Vel Miss Taylor is owned by King Racing Stable and Charlie K Racing Inc. of NY. The freshman filly by Ponder was bred by Mo Coo Inc. and Jonathan Klee Racing. It was her first career win and the time of 2:04.3 is her new record. She had previously had nine starts heading into the consolation with a pair of second place finishes.

Two-year-old pacing colts took a different route for the consolation as Checks Onthe Beach and Jeff Dever led gate to wire for the win in 1:59.4. The Check Six gelding set fractions of :30.4, 1:01.1, and 1:30.4 before fending off a late rally by Chucksfourtybucs and Chad Clark for the win by one and one-half lengths. Starlit Kissin JK and Gerald Miller finished third.

Emily Dever, Jeff Dever and Jeff Cranor own Checks Onthe Beach, who also earned his first career win in his ninth start. The homebred gelding is out of Dever’s mare, Rockin Kimage, who has spent many hours in the Speed Barn on display for fair goers during the Open House tours. Check onthe Beach was ranked 13th on the list to advance into the consolation.

Switching to the freshman trotters, Youknowyoudid and Mike Peterson were gate to wire winners in the filly division, taking home the top prize in 2:04.0, a final panel in :29.3. Trained by Mervin Schmucker, the You Know You Do filly is owned by Shady Lane Meadows and is also a homebred. Jailhouse Garland finished second for Gerald Miller while Virgne’s Aprillady and Jack Kieninger Jr. finished third.

In the freshman trotting colts and geldings division, Dover Glide and Chad Clark were winners in 2:01.4. Getting away fifth, the Dover Dan gelding, who was ranked 17th on the list of qualifiers, pulled to the outside at the half in 1:00.0 and flushed out Braxton and Jay Cross, which carried him into the stretch. Dover Glide was a winner by a neck over Asliveroffashion and Mike Peterson. Closed Deal and Jordan Ross finished third. Mark Wright of Kentucky owns Dover Glide, who is trained by Donna Loney.

Only one entrant was in the three-year-old pacing fillies with Vel Ya Want to and Bradley Ferguson going a training mile for the win in 1:59.3. King Racing Stable owns the Straight Shooting filly trained by Larry King. There was a walkover also in the three-year-old colt and gelding trot with V-Key’s Flying Jet and Jordan Ross taking home the money in 2:05.0. Carl Newland trains the Wewering gelding owned and bred by Hartley Farms Inc.

The three-year-old filly trot was won by Retha Babe, driven to victory by Mike Peterson in 2:01.0. Bangles N Beads and Brett Wilfong finished second over Brookview Cherie and Bradley Ferguson for third. Retha Babe is owned by Lucas Graber and trained by Enos Lengacher. Lyle Slabach bred the sophomore filly.

At press time around 7:30 p.m. the Governor’s Cup Championships were on a weather delay. Rain showers drenched Central Indiana around 5 p.m. causing the delay. Officials were assessing the track condition to determine if the card would be completed Thursday night.