Vel Keep Rolling and Mike Peterson used a late surge to score the win in the sixth race of the night at Harrah’s Hoosier Park. The duo scored the win in 1:55.0 as a longshot for the win. 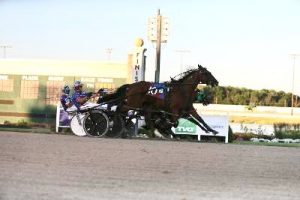 Starting from the second tier post 10, Peterson was able to follow Chips First Mess and Brandon Bates out of the gate and get away in third as fractions of :28.0, :57.0 and 1:26.2 were established. Vel Keep Rolling kept positioning along the inside as challengers began to move up on the outside and then found room on the far outside in the stretch.

Vel Keep Rolling kicked into gear, pacing home in :28.0 for the win by a neck over Lees Creek Flash and Andy Shetler in the $5,500 Fillies and Mares conditioned claimer. Chips First Mess finished third.

Vel Keep Rolling paid $98.40 for the win. The Time to Roll three-year-old filly earned her first win of 2021 and the second of her career. She competed on the Indiana Sired Fair Circuit last year for trainer Larry King and her previous record was 2:08.3 taken at Kentland. After racing at Hoosier Park earlier in the spring she returned to the ISFC for a start at Converse and Corydon before coming back to Hoosier Park for the upset win.

It was one of two wins on the card for Breeder Alvin Schwartz, who also raised the winner of the first race of the night Vel Donna. The four-year-old daughter of I Can Only Imagine scored a gate to wire win with Brandon Bates in the bike in a time of 1:53.2. She is trained by Robert Corbin and owned by Cavallo Stable. It was her third win of the year and her fifth lifetime trip to the winner’s circle. It also marked a new career best for the mare, who was claimed by her current connections in early May.