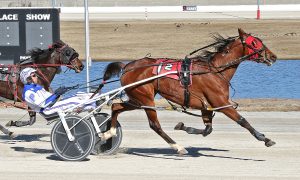 Starting from post one, Vel Keep Rolling and Chris Page used enough early speed to get the seat behind early leader Shesrockingwichita and Kayne Kauffman through early fractions of :28.0 and :57.1. Heading to the three-quarters the four-year-old mare was flushed to the outside and began to challenge Shesrockingwichita at the three-quarters in 1:24.3.

In the stretch, the two leaders began to battle, with Vel Keep Rolling getting the edge on Shesrockingwichita in the final strides for the win by a length and a half. Shesrockinwichita was a solid second over Alwaysthebstplace, another Indiana sired mare driven by Trevor Smith, for third.

Vel Keep Rolling paid $13.20 for the win. The Time to Roll mare is owned by Justin Belanger and also trained by him. He claimed the mare in late February from the King Racing Stable who campaigned her through the Indiana Sired Fair Circuit. Alvin Schwartz bred the mare, who earned her ninth career win in the race. She now has more than $58,000 in career earnings.

Vel Keep Rolling is the daughter of Keep it Fair, the Art Major mare who earned a mark of 1:50.4 and earnings over $300,000 during her racing career. She also has a three-year-old gelding for 2022 Indiana racing by Ponder.

Another Time to Roll winner on the Monday card was Fast Freddy Jo Jo, also a former contender on the Indiana Sired Fair Circuit (ISFC). Owned and trained by Jessica McCown since the beginning of February, Fast Freddy Jo Jo snapped the wire first for the win by a head in 1:54.1 with Cameron McCown driving. Abacus and Sam Widger finished second over Take a Stand and Dan Noble for third.