Vel Gorgeous Sammy scored his second win at Hollywood Gaming Dayton Tuesday, Nov. 30. Since joining the Kevin High Stable, he has only missed two checks in seven starts and now has a new career best time of 1:56.2. 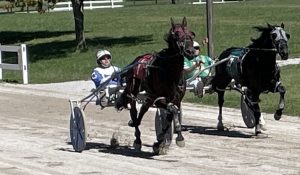 Vel Gorgeous Sammy, shown with Clay Craib at the Harrison County Fairgrounds in Corydon in September, has now won two races for his new connections with Clint Coy and trainer Kevin High. Photo by Tammy Knox

In the stretch, Vel Gorgeous Sammy was still sitting sixth but hit another gear and rallied late to get the win by a half-length over And I Quote. Dustup Hanover and Tyler Smith finished third.

Vel Gorgeous Sammy was the next to highest priced horse on the board, paying $93.20 for the win. The three-year-old He’s Gorgeous gelding is now owned by Clint Coy, who purchased him following his final race for his previous connections at the Harrison County Fairgrounds in late September on the Indiana Sired Fair Circuit. Bred by Alvin Schwartz, Vel Gorgeous Sammy now has in excess of $22,000 in earnings.

For Coy, it was his 14th career win and his second trip to the winner’s circle in pari-mutuel action. He earned his first pari-mutuel victory earlier in November with Vel Gorgeous Sammy at Dayton. This is the fifth year of driving for Coy, who was born in Decatur, Ind. and now calls Portland, Ind. home.