A total of $80,000 was spread out over eight Indiana Sired Fair Circuit (ISFC) Championships Saturday, Oct. 5 at the Shelby County Fairgrounds. Along with big money came some big upsets on the card that put the spotlight on two and three-year-old trotters and pacers sired in the state of Indiana. 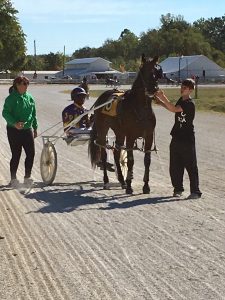 Kicking off the late morning card was a big win from Saltwater Gospel. Hailing from the Charlie Conrad barn, the Bring on the Beach freshman filly joined another Conrad trainee Moscato in the $10,000 ISFC Championship for two-year-old pacing fillies. Conrad opted to drive Moscato and named Jordan Ross to drive Saltwater Gospel. It was the first time in 17 starts that someone other than Conrad had driven her in a race and Ross stepped into the role with ease.

“The other filly (Moscato) can be a little tougher to drive, so that’s how I made the decision on which one to get a driver for,” said Conrad. “I told Jordan (Ross) she was better with just one move during the race. I also told him I thought she had a big shot to win.”

Saltwater Gospel has been racing all summer on the circuit. Owned by Diamond H Racing Stable of Greenfield, Ind. and Steve Carter of Londonderry, Ohio, she was transported to Conrad’s barn at the Shelby County Fairgrounds in April and got to work for the Indiana season.

“Steve dropped her off in April and we used all of May to get her ready for the fair circuit,” explained Conrad. “She’s been consistent all summer with mostly seconds and thirds. The only start where she didn’t race well was at the State Fair.”

Ross began his journey with Saltwater Gospel from the second tier in the eight-filly lineup and moved over to the rail early as ER Harper Rose and Don Eash led the way through swift fractions of :28.3 and :57.2. Robins on Time and Joey Putnam challenged from the outside but could never clear, keeping the tempo lively the first half. Saltwater Gospel began to move up in the second half of the race and when the field turned for home, he had her poised for a perfect move to the front, striding out by two lengths for the win in 2:00.0, a new lifetime mark. ER Harper Rose finished second over Rose Run Vision and Lyndon Frey for third.

“I thought she was kind of easy to get along with,” said Ross after the race. “Charlie told me he thought she could win, and he was right. She had finished second to Don’s horse (ER Harper Rose) in her last race, so I thought she had a shot to win. I got away perfect today and that helped.”

Saltwater Gospel increased her bankroll to nearly $17,000 with the win in the ISFC Championships. The homebred filly is one of 14 registered by first crop sire Bring on the Beach. Out of the 14 registered, 11 have raced this year with seven earning wins.

Ross closed out the ISFC Championships with another surprise trip to the winner’s circle in the three-year-old filly trotting ranks. Serene Hall, trained by Peter Redder, rolled by early race leader Dance Hall Brawler and Joe Putnam at the three-quarter mile marker and never looked back, winning by 16 and one-half lengths in a time of 2:02.3. The Guccio sophomore picked up her ninth career win for owner Therl Hensley of Daleville, Ind. Edens Big Dream and Zach Miller closed in well in the stretch to finish second over Dance Hall Brawler for third.