Uncut Gem turned in an impressive performance in the final of the $22,000 Go On BB series Thursday, May 13 at Harrah’s Hoosier Park. The series was named in honor of millionaire Indiana sired pacing mare Go On BB, who won numerous Indiana Sires Stakes and year end titles during her career. 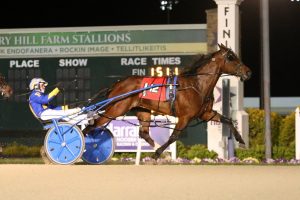 Uncut Gem and Joey Putnam stole the spotlight in the Go On BB Final Thurs. May 13 at Harrah’s Hoosier Park with a big performance that brought in a new career mark of 1:51.1. Photo by Dean Gillette

Starting from post one, Uncut Gem and Joey Putnam were content to let Pure Cotton and Trevor Henry establish the early pace as the field of 10 passed by the quarter in :26.3. Osiris’ Lil Sis and Peter Wrenn pressed the pace from the outside and was able to settle into the two hole as Uncut Gem made a move to the lead by the half in :55.0. From there, the sophomore filly controlled the race, scooting home in :27.2 for the win in 1:51.1. Pure Cotton was two lengths back in second followed by Osiris’ Lil Sis for third.

The second choice on the board, Uncut Gem paid $9.80 for the win. The three-year-old daughter of JK Endofanera is owned by Steve Amspaugh, Jon Taylor and Eric Demalon. Wilbur Eash trains the filly, who was bred by Lavon Miller.

Uncut Gem is now two for five in 2021 with only one start worse than second this year. She earned a new lifetime mark in the mile, which was her second straight victory. After only winning one race at two in limited starts, Uncut Gem has increased her career bankroll to more than $57,000 with the win. She is part of the very successful first crop of JK Endofanera. Her dam, Straight Fuel, who is also an Indiana sired product by Third Straight, is a 100 percent producing broodmare. Out of five foals of racing age, all have raced and taken marks of 1:56.1 or faster. Uncut Gem is a half sister to Pure Maid, winner of more than $128,000.