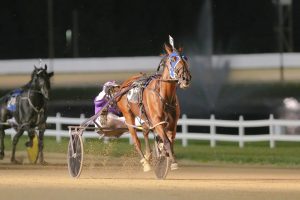 Starting from post five, Uncmprmising Z Tam got away in mid pack while Hallie’s Comet and Josh Sutton set the first fraction of :27.4. Heading to the half, Uncmprmising Z Tam moved to the outside and flushed cover before the half in :57.1. In the final stages of the race, the seven-year-old was forced three-wide to prepare for the stretch drive.

Once clear, Uncmprmising Z Tam rallied home in :27.4 to earn the win by two and one-half lengths over Hallie’s Comet. Funatthebeach N and Ned Hodkinson rounded out the trifecta.

Uncmprmising Z Tam paid $5.80 to win as the favorite. The former Indiana Sires Stakes Super Final champion is owned by Z Tam Stables of New York and trained by Jamie Macomber. Victory Hill Farm bred the gelding. He is closing in on $500,000 in career earnings and his career best time remains at 1:49.0 taken two years ago at the age of five. He is completing his sixth season of action on the racetrack.

It was one of four wins on the afternoon for Tetrick. Despite driving at the track part-time, Tetrick is currently ranked 11th in the standings for 2020 with 24 wins and a win percentage of 23.5.