Going to Corydon every year for Indiana Sired Fair Circuit action is a trip home for the Conrad Stable. It makes it extra nice when they can pull in a win in the process, Ultimaroca was a winner for the stable in the first division of two-year-old colt and gelding pacers Wednesday, Aug. 19 at the Harrison County Fairgrounds. 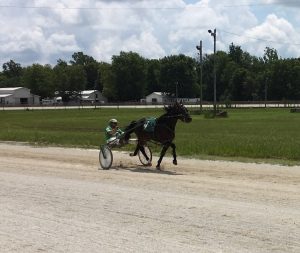 Ultimaroca and Charlie Conrad, shown winning earlier this year at the Shelby County Fairgrounds, picked up a win for the stable at Corydon Wednesday, Aug. 19. Photo by Tammy Knox

Trainer-drive Charlie Conrad got Ultimaroca out of the gate quickly and placed the freshman colt on the front through fractions of :30.3, 1:01.4 and 1:29.4. There was movement to challenge at their backs but no one could ever get close as the duo crossed the finish line two lengths ahead of their opponents in 2:00.4. Vel Letsroll South and Mike Peterson finished second followed by Timenmoney and Clifton Bell for third.

The ISFC is back in action Tuesday, Aug. 25 with racing set for the Converse Fairgrounds. First post is 11 a.m.