The dynamic team of drive Alex Udell and owner-trainer Jack Myers went into the Indiana Sired Fair Circuit (ISFC) Championships Tuesday, Aug. 6 with some horsepower and came home with some trophies. The duo connected for three $20,000 championship wins on the day, sweeping the two-year-old trot and the three-year-old colt trot. 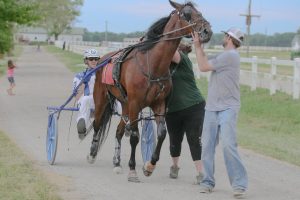 The team of Alex and Kristyn Udell and Kristyn’s brother, Kenneth, were busy Tuesday, Aug. 6 for the ISFC Championships at the Indiana State Fair. They are shown above earlier this year on the ISFC circuit with J-S Power Chip, who finished fourth in the three-year-old colt trotting final. Photo by Dean Gillette

Udell and Myers started off their day with two talented fillies in the $20,000 two-year-old filly trot. Both J-S Miss Carly and J-S Miss Ruby had multiple wins this summer, scoring six and four victories, respectively. Udell drove J-S Miss Carly with Mike Peterson getting the call behind J-S Miss Ruby. Udell sent J-S Miss Carly straight to the lead fending off stablemate J-S Miss Ruby, who was first over, around the final turn. The Guccio filly trotted home to a six and three-quarter length victory in a time of 1:58.3, a new career best. Whom Shall I Love and Don Eash held steady to finish second over J-S Miss Ruby for third.

In the two-year-old colt and gelding trotting ranks, J-S Jasper has been equally impressive this summer in the ISFC, winning six of seven starts in 2019. The Big Stick Lindy gelding wasted no time getting into the action as Udell grabbed the early lead and never looked back, winning by two and one-quarter lengths in 1:59.4, a new career best. Stablemate J-S Ivan The Great, driven by Peterson, followed along for second followed by Skyway Caliber and Rocky Loney for third.

The final race of the evening program had three from the Udell-Myers trailer in the race as Jesse Popper, J-S Swanman and J-S Power Chip all made the final of the three-year-old trotting colts. Udell placed Jesse Popper right on the lead at the start and could not be overtaken, winning by two lengths in 1:57.2. Golden Wheel and Joey Putnam turned in a good performance for second over J-S Swanman and Peterson for third. J-S Power Chip rounded out the Myers-Udell entries to finish fourth with Dan Shetler driving.

Action continues at the Indiana State Fair Wednesday, Aug. 7 featuring 12 races of Grand Circuit action beginning at 6 p.m. The card includes the prestigious $55,150 Fox Stake set for race six on the card with an estimated post time of 7:15 p.m.