Fresh off their double win day Wednesday at Converse, Alex Udell and Jack Myers teamed up for five wins on the Thursday racing program at Converse. The duo connected for four of the wins with two-year-old trotters, showing the depth of their young stable on the Indiana Sired Fair Circuit in 2019. 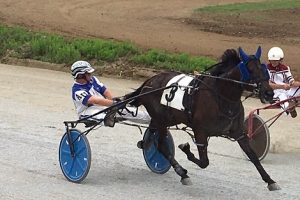 Based out of the former Hoosier Downs in northern Indiana, the Myers Stable scored a win with J-S Miss Carly in the freshman filly trot. The Guccio filly won the fastest of six heats, turning in a gate to wire effort for the win by more than 11 lengths in a time of 2:07.0. Udell and Myers also scored a win in the fourth division with J-S Miss Ruby, a daughter of Jailhouse Jesse who won in 2:08.3.

The colt and gelding ranks for two-year-olds were significantly slower with J-S Ivan The Great for Udell and Myers picking up the fastest division in 2:14.0. The Swan for All gelding was a gate to wire winner. Udell and Myers also picked up a win with J-S Jasper, a Big Stick Lindy gelding that won by more than 16 lengths in 2:15.0.

The final win of the day for Udell and Myers came in the three-year-old filly ranks with J-S Perfect Cache. The Aracache Hanover filly won her division in 1:58.1, the quickest of the day for females. The quickest mile of the day went to E Mode’s Desire, trained and driven by Mike Peterson. The Real Desire sophomore won his heat of three-year-old colt and gelding pacers in a time of 1:57.2, just three-quarters of a length over Isitlikeitlooks and Jeff Dever.

Other big winners on the day for drivers included Doug Rideout with four wins and Joey Putnam, who picked up a driving triple on the card. Don Eash and Michael Detweiler also had driving doubles.

Video of both days of action at Converse are now available on the ISA Website.