Reaching 1,000 training wins is a feat not many achieve, but Tyler George has now entered that elite group. The 34-year-old native of Ohio had two shots to pick up the milestone Thursday, Sept. 3 at Harrah’s Hoosier Park and he scored in the first race of the night with Good Image. 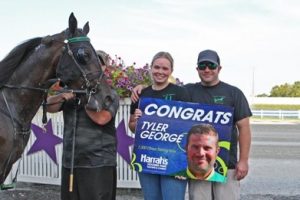 Driven by Trace Tetrick, Good Image made a move to the front around the final turn and fended off opponents for the one and one-half length win in 1:53.1 to tie his career best. The Rockin Image three-year-old now has two wins this year for George and owner Eleven Star Stables of Portland, Ind.

George is currently leading the trainer standings this season at Harrah’s Hoosier Park with 41 wins. His 999th win was recorded with Always Soggy Thursday, Aug. 27.

The win with Good Image was the 79th of the year for George, who is maintaining a .427 training percentage this year. With $600,000 in earnings for the year already, he is well on his way to reach $1 million for the year, which will mark the fifth year in a row horses from his barn have accumulated more than $1 million.