The Jack Myers Stable is looking like their latest crop of two-year-olds will be just competitive as last year’s string. The Stable sent out three winners in the freshman trotting ranks Thursday, July 23 at the Shelby County Fairgrounds. 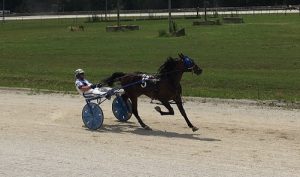 J-S Swan Returns was one of three two-year-old winners on the Thursday, July 23 racing program at the Shelby County Fairgrounds. Photo by Tammy Knox

Driven by Alex Udell, J-S Siesta Tan had an inside post and was able to slip into the two hole behind Indiancreek Blu and Doug Rideout for the first half. Heading to the three-quarters, Indiancreek Blu made a break and opened the door for J-S Siesta Tan to move to the lead. From there, the Guccio filly trotted home strong, winning by three lengths in 2:09.2. Sunset Jetta and Mike Peterson finished second over Molly’s Joan, who recovered from an early break for Lester Raber and rallied back for third.

J-S Siesta Tan is trained by Myers and is now three for three in Indiana Sired Fair Circuit action. The $17,000 Michiana Classic Yearling Sale purchase is racking up major points for the Governor’s Cup Final set for the Indiana State Fairgrounds later this year.

Joining J-S Siesta Tan as a winner on the card was stablemate J-S Miss Ashley in the third division. Also by Guccio, the filly was parked during the middle half of the race before gaining the lead in the stretch and trotting home for the win in 2:08.3, two and three-quarter lengths ahead of JL Dance With Me and Jordan Ross. Big Time Brooke driven by Jay Cross finished third.

It was the first career win for J-S Miss Ashley. She was an $11,000 purchase from the Hoosier Classic Yearling Sale last fall under the name PMs Conclusion.

The focus then turned to the two-year-old colt and gelding trotters with J-S Swan Returns rounding out the three-win day for Myers and Udell. Starting from post four, the Swan for All gelding got away second behind Fashion Sense and Joey Putnam before moving out at the three-quarter mile marker to avoid the leader who went on a break. Once clear, J-S Swan Returns pulled away from the field he gained a big margin for the stretch drive, winning by 12 and one-half lengths in 2:10.0. Charm N Caesar and Jack Kieninger Jr. rallied back from a break at the start to finish second over Vel Jesse and Mike Peterson for third.

It was the first win for J-S Swan Returns, who was bred by Daniel Lengacher. He was purchased by Myers for $18,000 at the Hoosier Classic Yearling Sale last fall under the name Uber Swan before he was renamed for the stable’s moniker.

In addition to the Myers-Udell triple, trainer-driver Doug Rideout had three winners in the freshman trotting ranks. Heres Devotion, a daughter of Here Comes Herbie, was a winner in the filly division in 2:07.2. Jessies Outlawed was also a winner in the colt and gelding ranks in a time of 2:09.3 while Brookview Bluto turned in the fastest time of 2:07.4 for freshman trotting colts and geldings.

The ISFC moves to the Fayette County Fairgrounds Monday, July 27 and Tuesday, July 28 at Connersville. First post is 11 a.m. both days.