The preliminary rounds are in and the top eight finalists have been determined for the Governor’s Cup Championships set for 6 p.m. Thursday, Aug. 11 at the Indiana State Fairgrounds. A total of $200,000 is earmarked for the top two and three-year-olds on both gaits for the finals. 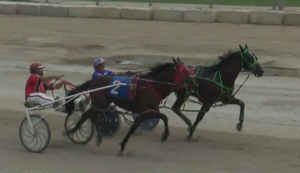 Lil Joe IV and Gerald Miller (on the outside) led all two-year-old pacing colts and geldings in the “Quest For the Governor’s Cup” set for Thursday, Aug. 11 at the Indiana State Fairgrounds.

Guided by Gerald Miller, Lil Joe IV is the latest among a string of horses owned by Turrondus Smith of Canton, Miss. Smith started off with success from King Lil Joe and has since named horses in procession behind him with the latest two-year-old the fourth on the list. He also owns Lil Joe V, who is a two-year-old this season by Always a Virgin.

Lil Joe IV has not finished worse than third in 12 starts this season. His best time was taken at Converse early in the series in 2:01.4. Terry Haimes handles the training duties for Lil Joe IV.

Ranked second in points among two-year-old colt and gelding pacers is Starlit Rockstar, who had 294 points, and M-M’s Tony, also accumulating 294 points. The Rockin Image gelding had the minimum seven starts to advance to the Governor’s Cup Championships and has won five of seven this season for owner-trainer-driver Mike Peterson. His best time was taken at Frankfort in 1:59.2.

M-M’s Tony has won five of eight this season and has also not finished back of third. His best time of 2:01.0 was taken last month at Shelbyville for owner-trainer Alvin Miller.

In the freshman pacing filly ranks, Kruisin Kristen was the standout on the ISFC this season, earning 332 points. With seven starts exactly, the Tellitlikeitis filly is six for eight with a best time of 2:00 taken at Portland in mid-July. Kruisin Kristen is owned and trained by Alvin Miller.