A total of 15 races were dedicated to two-year-old pacers at Converse Wednesday, June 5 giving race fans the first glimpse of some of the talent brewing in the state. Rollinwithdesire and Travis Seekman turned in the fastest division for freshman colts and geldings while Dojea Gigi and Mike Peterson scored the fastest of nine divisions for the freshman fillies. 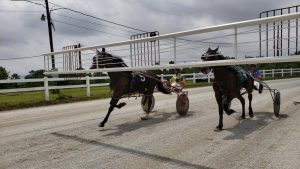 The late morning session kicked off with Dojea Gigi wiring the field in the first division of two-year-old filly pacers. Also trained by Peterson, the Tellitlikeitis filly rolled out to a commanding lead and set fractions, turning two middle quarters in under the 30 second time barrier en route to the victory in 2:02.1. J-S Lady Virgin was the second fastest two-year-old filly on the day for the combination of Alex Udell and Jack Myers while Francium and Mike Hollenback finished third.

Dojea Rita is owned by Peterson and his dad, Gary. The filly is out of the tough race mare Maid’s Last Work, who is also the dam of Dojea Rita, now three and a standout on the Indiana fair circuit last year.

Rollinwithdesire used similar strategy for the Seekman family and busted out of the gate and was on top by eight lengths by the quarter. The rest of the field had to play catch-up but Rollinwithdesire fended off his competitors by a neck for the win in 2:01.2. Townline Jated and Jay Cross finished second over Timetorollthedice and Jordan Ross for third.

Rollinwithdesire, a son of Time to Roll, is owned by Desirae Seekman, who is also the breeder. The homebred Indiana sired gelding is trained by Joe Seekman. Rollinwithdesire is the first foal out of Earthly Desire, who earned 10 wins and took a mark of 1:55.1 during her career for the Seekman family.

Action continues Thursday, June 6 at Converse with two-year-old trotters in action to kick off the session. Racing begins at 11 a.m.