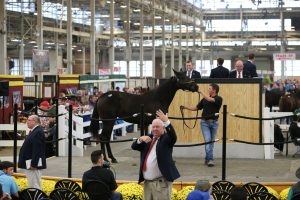 Bid spotter Kevin Mack works to get another bid on a horse during the Hoosier Classic Yearling Sale at the Indiana State Fairgrounds Friday, Oct. 22 and Saturday, Oct. 23. Photo by Dean Gillette

Ponda Chase, a son of Swan for All, was the highest priced yearling during the second session, fetching a price of $160,000. The black colt from the Pond A Acres consignment was purchased by Peter Wrenn, agent.  Ponda Chase is a full brother to Ponda Adventure, who was an Indiana Sires Stakes winner this past season as a two-year-old. The dam, Wildflower, has a mark of 1:55 and earned in excess of $267,000 during her career. Ponda Chase is her second foal.

Just a few Hip Numbers later brought in the second yearling who garnered a price tag of over $100,000. Also by Swan for All, Brookview Darius was purchased for $105,000 by Alfred Kowalewski of Bloomfield Hills, Michigan. The colt is out of Witty’s Winner, who is the dam of Brookview Bolt, standout Indiana Sires Stakes performer the past two seasons. Brookview Darius is the third foal from the mare, who has a mark of 1:54.4 and earnings of nearly $100,000. She is also a half sister to Mission Accepted, who earned more than $1 million during his career racing in Ohio and taking a mark of 1:50.2. Brookview Darius was part of the Brookview Farms consignment.

Pond A Acres also had a half brother to Ponda Warrior in their consignment, Ponda Executive. The bay colt from the first crop of Check Six was purchased by Peter Wrenn, Agent, for a price tag of $60,000.

Another yearling of note was Why Not Now, the Always A Virgin full brother to Virgo, who has a mark of 1:50.0 and is one of the top three-year-olds this season. Why Not Now, part of the In Law Stables consignment, was purchased for $38,000 by Dylan Davis, agent for Howard Taylor.

In Law also sold a half sister to Swift Swanda. Lipstick Lori, a daughter of You Know You Do, was purchased by Anthony Lombardi for $30,000.

Topville Swift Dan from the second crop of Dover Dan, was purchased for $28,000 by Jesse DeLong. The colt from the Topville Acres consignment is a half brother to Satin Dancer, who has more than $739,000 on her card and a mark of 1:53.0.

The 2021 sale had 400 yearlings walk through the ring. The average was $21,441 with a total of nearly $8.6 million collected on the lot of future stars for Indiana. Statistics were drawn from the Hoosier Classic Yearling Sale Website.