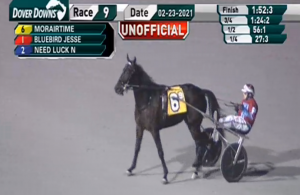 Morairtime and Jack Parker Jr. head to the winner’s circle for the second straight week in Open Trot action at Dover Downs.

Morairtime wasted no time getting to the lead from the gate, sliding over to the top spot before the field reached the first turn. From there, the race was in complete control by driver Jack Parker Jr. through an even-rated mile in :27.3, :56.1 and 1:24.2. Around the final turn, favored Northern Express and Russell Foster moved to the outside to challenge, but all Parker had to do was lift the lines and Morairtime pinned her ears and trotted on home for the win by four and one-half lengths. Bluebird Jesse and Tim Tetrick finished a solid second over Need Luck N and Kim Vincent for third.

The second choice on the board, Morairtime paid $5.20 for the win. The Airzoom Lindy five-year-old completed the mile in 1:52.3.

Trained by Carol Jamieson-Parker, Morairtime is owned by James Moore III of North Carolina. John Bontrager Jr. of Millersburg, Ind. bred the mare, who is closing in on $250,000 in career earnings. She now has 12 career wins and was just a tick off her career best time, which was taken at The Meadowlands in 2020 in 1:52.2.

Another Indiana sired horse made their way to the winner’s circle on the Dover card as It’s Rockin Randy scored a win in 1:56.1 in the conditioned pace. Trained by Justin Brenneman, the Always a Virgin three-year-old gelding moved to the outside after the quarter in first over fashion for Andrew McCarthy and grinded his way to the wire for the three-quarter length win in 1:56.1. Abstraction and Art Stafford Jr. finished second over Rose Run Vortex and Allan Davis for third.

Bred by Jesse DeLong, Its Rockin Randy is owned by Justin Brenneman. It was the first win of 2021 for the gelding, who earned his second career win in the effort.