Two Indiana sired yearlings were knocked down for $100,000 during the first of two days of the Hoosier Classic Yearling Sale Friday, Oct. 25. A total of 190 yearlings went through the ring with Hip No. 191 kicking off the second day of the sale Saturday, Oct. 26. 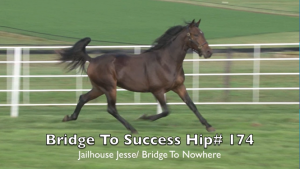 Bridge to Success, a full brother to Bridge to Jesses, was one of two yearlings to hit $100,000 during the first session of the Hoosier Classic Yearling Sale.

The first yearling to be knocked down at six figures was Hip No. 144, a Rockin Image colt from the David Wayne Yoder consignment, who was serving as agent for Doyle Miller. Sick For It, a first foal from the tough race mare She’s Glorious, was purchased by Dana Parham of Boca Raton, Fla.

The second yearling to reach $100,000 was Bridge to Success, a full brother to the standout trotter Bridge to Jesse’s. The Jailhouse Jesse Colt, consigned by Wilt Standardbreds, was purchased by his older brother’s connection with William DeLong of Clinton, Wis. Signing the ticket. In addition to his famous brother Bridge to Jesses, who is closing in on $1 million in earnings, Bridge to Success is a half-brother to Bridge Works, an Ohio bred gelding who took a mark of 1:56.2 earlier this year as a three-year-old.

The second day of the Hoosier Classic Sale gets underway at 10 a.m. at the Indiana State Fairgrounds.