The Trottingbred racing circuit in northern Indiana has produced numerous Standardbred horsemen over the years, from Don Eash, the Rheinheimers and the Cross family to more recent stars like LeWayne Miller and Alex Udell. But the smaller breed derivative of the Standardbred is still going strong, attracting large crowds on weekends at tracks such as Nappanee Raceway. James Platz did a story on the breed and the industry in the September issue of “Hoof Beats,” which arrived in homes this week. 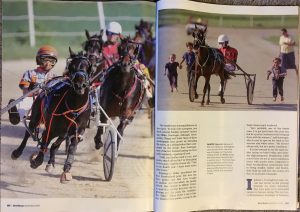 James Platz did a feature for the September issue of “Hoof Beats” on Trottingbred racing in northern Indiana.

Platz and photographer Dean Gillette covered a weekend of racing that takes place Friday and Saturday at the quarter mile track in Nappanee. The Trottingbreds, which do not exceed 51.5 inches in height, race a half mile, making two laps, which is great for viewing by the crowds in the grandstand. The equipment mirrors Standardbred racing and the Trottingbreds have developed quick speed, turning in a first lap quarter mile in :31 seconds recently at the track in LaGrange, Ind.

Several decades ago, Trottingbreds were more prevalent around the United States. Jay and Steve Cross’s father, Harry, had the top stallion in the nation. The Trottingbreds used to be featured at Hoosier Park one weekend a year in exhibition races in the late 1990s before the Standardbred racing program and eventually, the Trottingbreds were adapted over to the Harness Horse Youth Foundation’s Summer League program which now includes a final at The Meadowlands on Hambletonian Day.